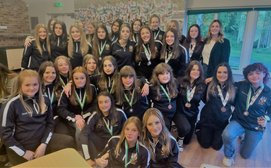 A packed function room celebrated Girls rugby at the end of season awards night. Any girl from age 6 can now play at Penrith RUFC. The Womens team is now well established so there is a clear pathway from girls to Womens rugby.
Over 40 Girls were awarded club medals and certificates for their contribution throughout the year by Womens Captains Heather Grainger and Caron Davidon who offered their congratulations on a fantastic season. New players had joined throughout the year with some leaving the "rugby family" but hopefully they will return. The Girls were also given their new David Allen sponsored Midlayers!

The U13s had improved immensely throughout the season culminating in impressive performances at 2 festivals and being Plate Winners at the Darlington festival.
The U15s had a fantastic tour to Scotland playing the Scottish Champions Stirling and had some excellent full 15 a side games in the National Cup making the Regional Final at home to Sandal. A fantastic occasion with a large crowd which has done alot to promote girls rugby in the area. A large number of girls had attended Cumbria assessment sessions and were hoping to be selected.
The U18s have had difficulty getting the numbers to play and the opposition but had continued to train. The next day two of the team Polly Bowman and Megan Phillips- Craig were playing for the full Cumbria Womens Team and Emma Campbell who is away at Bishop Burton College recently made her Scotland U18 Debut.

Lissee and Penny spoke well to thank all the volunteers and especially the coaches and the girls gave Lead Coach Nigel Beaty a card and gift.
Nigel outlined the challenges for next season as the Girls move to U12/U14/U16/U18 age groups. Despite healthy numbers this season more players are required and more volunteers to help grow the teams. He reported on the progress in schools with both UCC and QEGS fully supportive and offering girls the opportunity to play at school so the future looks good.
Any girls looking to try out rugby next season contact Nigel n.beaty@sky.com