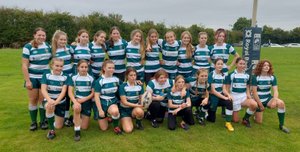 The girls available for a Saturday fixture travelled over the border and enjoyed two 8 a side games and then a full 15 a side match.

The 2 8 aside games v Annan and a combined team were evenly match winning one losing one both by one score. The 15 a side game where 4 players from other squads joined in saw them losing at half time by several scores before regrouping well and winning the 2nd half.
Game 1 v Annan/Carlisle lost 2-3.
Strong runs from Hazel and Chloe and good handling saw Evie H score. Excellent off loading a feature of the girls play saw Hazel score in the corner. Annan scored their tries from breakaways usually after good defence high up the pitch .
Game 2 V Ayr/Stewartry won 3-2.
Good defence at the start led to a turnover giving Lill TP a chance to show her footwork and score. The girls were attacking space well and warming to their defensive duties with Amber putting in a powerful tackle to drive a ball carrier into touch. A fine line out with Maebh throwing to Emily saw the ball moved along the line for Lili to repeat her score. Emily was next to impress with her tackling before a fine move with lots of passes saw Chloe finish strongly.
Game 3 - 15 a side Mainly England (Penrith/ Carlisle/Ayr) V Scotland (Annan/Stewartry/Ayr)
Their first 15 aside outing of the season, including lineouts and scrums. They played against a group of experienced U16s. The girls came under early pressure and despite good defence conceded three early trys. The Penrith team played some fantastic running rugby and scored an excellent try after great support play by the team with a poweful finish from Chloe. The ht score was 4-1. The team regrouped and came out in the second half energised controlling possession, playing flowing running rugby. They capitalised on the early control with a second try from Chloe after fantastic build up. The Penrith defence was solid with some magnificent tackles made by the whole team in defence . The Scottish team again scored a good try after sustained pressure. The girls came straight back with a fast flowing attack which took the team from one end of pitch to the other, with Amber breaking though the back line to out pace the opposition and complete a superb team try. A great response to win the second half 2-1.
Next Game U15s V Netherhall Sun 3rd October 2pm KO