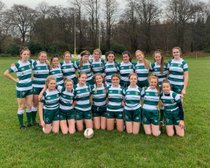 Great start to the Girls U16 tour, good rugby and fantastic hosts.

The first game of the tour was 10 a side against East Kilbride RFC /Strathaven RFC squad. All the players enjoyed equal game time with several combinations used, contested 5 player scrums on a full pitch for 40 mins.It was great to see the tries spread

The first game of the tour was 10 a side against East Kilbride RFC /Strathaven RFC squad.
All the players enjoyed equal game time with several combinations used playing contested 5 player scrums on a full pitch for 40 mins.
It was great to see the tries spread across the group in the 16 try to 4 win.
Lexie Hodgson got the ball rolling as she shrugged off an attempted tackle on the wing before running in. The home team replied before Amber Beaty break and off load saw Emily Hetherington in a great support position to drive over and score. Chloe Browns break then set up Lexie 2nd try.
A good period of home pressure with Maebh McGrath prominent in defence was finally ended when Lili T-P gained a good turnover and ran in to score but the home team were not to be denied as their pacy winger ran in from half way.
The team leaders showed excellent game understanding as they identified the areas to work on at half time.
Katie Smith was part of the 9 replacements and she showed the way catching the ball at pace to burst through and score.
Penny Robinson drove over to score before good link play by Aimee Powell Currie gave Leila Robinson the chance to drive over from 20m.
After half time the home team had an extra player for a while to keep the game even an were next to score. Evie Holme scored after one of her trademark strong carries before Caitlin Padgett had a chance to show her pace scoring from 60m. Evie Holme scored her 2nd before a brace from Lili T-P one from her own half. Penny scored her 2nd before Becca Newby scored 2 one after more good work from the busy Charlotte Harnwell and one from 70m as her twinkle toes beat the defenders before she sped home. The home team were always competitive and scored a try their efforts deserved before Evie Holme completed her hat trick with a fine 40m break.
The girls enjoyed some excellent hospitality, Capt Pippa Shay and vice Capt Katie Smith thanked everyone and handed over gifts. The girls enjoyed mixing with the hosts before an amusing Welly Wanging contest which went down to the final throw with a win for the home team!