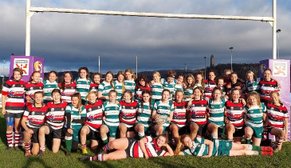 The 2nd U16 game of the tour was against Stirling County one of the strongest teams in Scotland who have an excellent girls section. A full 15 a side match on the main pitch. 8 player contested scrums and no conversions for more ball in play time.

The 2nd U16 game of the tour was against Stirling County one of the strongest teams in Scotland who have an excellent girls section. A full 15 a side match on the main pitch. 8 player contested scrums and no conversions for more ball in play time.
A high quality match of 30 min halves with the girls taking an early 10 points to 5 lead before conceding 5 tries in the final 10 mins of the 1st half. They drew the 2nd half 10 -10 a great comeback after the game the day before and less sleep than normal!!
After an even first 5 mins with both teams pressing well in defence Lili Thompson- Parry who had an outstanding game broke clear to make 50m up the left wing, stopped 5 m out the Penrith girls retained possession and built pressure, Evie Holme was just denied before scrum half Charlotte Harnwell passed to fly half Amber Beaty who passed to Leila Robinson and looped to find space and score.
Back came Stirling and after 12 mins their powerful prop burst through and despite a brave attempt by Charlotte she scored for 5-5.
For Penrith Caitlin Padgett used her strength to break a tackle and gain 50m , the defence was back, support was good to continue the attack with Evie Holme making 10m before popping to Caitlin to score and 10-5.
The work in defence was impressive and noticeable was the involvement of the whole team with improved confidence evident from Maebh McGrath, Evie Lightburn, Lily Bell, Lily Salmon ,Lexie Hodgson and Emily Hetherington.
Stirling retained the ball superbly for many tackles and rucks which were well contested by both teams before finally crossing for a try and 10-10 after 20 mins.
It was then the floodgates opened as tiredness kicked in, some kicks were not chased well and Stirling talented backs made the most of the opportunities to take a 10-30 lead at half time.
The Girls regrouped at half time, clarified the areas to work on and the different law interpretations and showed great determination to draw the 2nd half with 2 tries from Evie Holme and Caitlin.
Evies’ try came after Amber, Chloe and Katie had made ground and several rucks had been won.
Stirling scored to make it 15-35 before good work from Lili T-P and Leila Robinson gained possession and the ball was passed by scrum half Aimee Powell Currie to Lily Salmon to Caitlin who broke clear to score from half way for 20-35. Stirling had the final try for the score to finish 20-40.
The girls can be proud of their performance, everyone played some of their best rugby and the game understanding continues to improve. Territory wise they were on top but learnt that gaining and retaining possession becomes crucial against quality opposition. There were some excellent passages of play where their off loading game was good to watch with Penny Robinson and Pippa Shay showing their strength in the tackle. The breakdown was competitive both teams back on their feet quickly, counter rucking and looking for turnovers – Lili T-P, Katie Smith ,Penny Robinson, Charlotte Harwell and Sofia Hellevik impressing for Penrith in this area.
The scrum was competitive despite several changes and position swaps with Lily Salmon and Maebh Mc Grath being particularly adaptable after injuries to front row players Chloe and Sofia with even a scrum against the head!
The girls enjoyed some excellent hospitality, Capt Penny Robinson and Vice Capt Amber Beaty thanked everyone including the excellent referee and handed over gifts. The girls enjoyed mixing with the hosts before an amusing Welly Wanging contest which we once again lost. (We better practice for the next tour!)