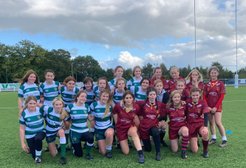 Netherhall and Penrith U15s enjoyed well contested 4 x 15 mins of 10 to 13 a side at a sunny Winters Park. Proving to be an excellent exercise for all players.

Promising start as the new Y9/U14 girls move up to join U15s/Y10 girls for their first game. The younger girls settled in well and in particular Eimhear who was one of the best players on view. Using a 3/4 pitch initially 11 a side then with 2 Penrith girls guesting for Netherhall 13 a side with 5 player scrums. The scrums progressed to contested with new hooker Evie Wallace impressing.
Netherhall kicked off and scored in the first minute.
After an excellent tackle and follow by Evie Holme the ball was moved to Chloe to break and score.
Then from a lineout, a good throw by Evie Lightburn and take by Chloe the ball was passed out to Caitlin who ran the length of the pitch to score.
The girls have been working on the tackle area and it was good to see more girls getting turnovers- Katie, Evie H, Amber, Lili, Leila standing out in this area.
The game was even and several breaks were stopped by amazing tackles by full back Eimhear
Netherhall worked the ball well to level the scores at 2:2
A Leila tackle helped regain possession , Evie Wallace drove on strongly for Lill T-P to show her pace and score at the end of the first session.
Penrith kick off and stayed in Netherhall territory before Leila broke several tackles to score.
Eimhear ran more than half pitch before losing the ball from a strong tackle.
There Were some kicks form both sides some working well before Netherhall scored.
A good turnover by Amber gave Caitlin possession and she broke through and scored from distance.
Next it was Amber who made use of space out wide to score from 30m for 6:3
Then Eimhear ran 3/4 of pitch and scored an excellent individual try.

For the 3rd and 4th session Evie Holme and Leila played for Netherhall.
They were both instrumental in a break for a score and 7:4
Amber kicked into space leading to a Netherhall knock on and from the Penrith scrum Aimee moved the ball to the blindside for Caitlin to run in from half way..
The game remained even and guest player Evie put in the tackle of the day on Caitlin.
The ball ran loose as Netherhall were attempting to score and Caitlin took advantage to run the whole pitch to unselfishly off load to Lili TP in support.
After a high tackle by Penrith and penalty Netherhall drove over to score
A superb Katie turn over and off load saw Chloe break several tackles up the touchline to score before back came
Netherhall to score for 10:6 at end of 3rd quarter.

Last quarter
Netherhall kick off and regained possession to score.10:7
A long kick out of defence by Amber gave Penrith possession before another Caitlin try.
Netherhall then replied with a try.
Jessica passed well to Charlotte who made a good run before a high tackle stopped her progress
Gracie gained confidence as the game progressed making several strong runs and was next to score.
Evie Lightburn and Lily Bell moved the ball and Aimee was off on a side stepping run before Netherhall turned the ball to break and score.
Amber made a try saving tackle before a penalty gave Netherhall the chance to drive over for 12:10
The final kick off saw a Netherhall knock on with Katie playing to the whistle and collecting to score and a final score of 13:10.