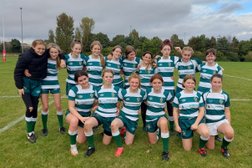 This was a fantastic game for the girls, tremendous amount of learning on how to play 15 a side rugby, getting used to the Laws and showing that they can compete. Lots of areas are easily fixed and these improved throughout the match.

Houghton RUFC 32 Penrith RUFC 22
Proper game!
Penrith entered the National Cup and all the administration required for exactly this experience.
A proper game where the girls came up against a well organised and experienced squad.
The girls had many challenges and responded superbly showing great effort, commitment, bravery and no little skill. Unfortunately 4 covid cases had reduced the squad to 16 with some experienced forwards missing there were some last minute positional switches including some first ever games in the front row!
Lots of firsts for the girls, 2 x 30 min halves, official referee no leeway (they now know how far getting back 10m is!), first 15 a side game for the 6 Y9/U14 girls, 8 player contested scrums, conversions,etc
It was an even start with possession changing hands but no team making much headway as the tackling was excellent from both teams. Penrith began to get on top but couldn’t quite get the ball to the space and when they did Houghton had players of similar pace. Penriths’ work at the breakdown was much improved, lots of good rucking with Leila. Katie and Evie Wallace to the fore when required and several excellent turnovers – Lili T-P in particular proving a real menace for the opposition at the tackle area. However the penalty count was very high which gained Houghton territory and they crossed the try line for the lead.
Penrith then had to defend too much as they lost ball in the contact and they did superbly with Eimhear, Evie Holme and Rebecca impressing. Eventually the powerful ball carriers from Houghton began to tire the defence and create openings and they scored a 2nd try.
Caitlin in the centre was close to breaking away several times with Penrith moving the ball well, she eventually got away and made a 50m run , normally with her pace that’s a try but the Houghton winger chased her down 5m from the line with a superb tackle and the ball was lost forward.
Amber at fly half kicked well to gain some territory and a deserved try came when Charlotte who had an all action game at scrum half passed to Evie who off loaded to Caitlin she straightened the attack and fed Sofia who stormed to the line.
Evie Wallace had been tackling determinedly but a heavy tackle on her led to her game being over after 20 mins, with the one replacement Charlotte Peart coming on. Charlotte was to have an impact on the game as her footballing skills meant the team scored their first ever conversions in the 2nd half to great cheers from the girls.
Half Time 10-5 to Houghton
The 2nd half started badly, the drop out bounced awkwardly and was knocked forward off Amber, the Houghton player followed up and played on as the defence stood and watched for an easy walk in try.
Penrith moved the ball well and their offloading and popping from the floor created some impressive rugby in contrast to the opposition who used their strong runners up the middle looking to set up rucks.
The penalty count was now moving in Penriths’ favour and from one penalty 20m out Charlotte fed Evie on to Caitlin who burst through the defence to score under the posts.
Line outs were uncontested with Lily being lifted to give clean ball for the backs and with Amber organising well to move the ball across the pitch.
Houghton then responded, good continuity and driving play sucked in the defence and their quick winger took advantage to score an excellent try under the posts.
The girls dug deep to come back, Leila and Sofia led the way with some strong runs Sofia having an excellent game in her first match of the season. The lack of replacements was beginning to tell in the defensive work which had been excellent and led to a further try by Houghton.
The girls didn’t give up coming back with the best rugby of the match, attacking up the right with Sofia, Matilda and Becca before the ever present Charlotte switched play to the left with Amber and Gracie making ground to give Caitlin space to cross for her 2nd try. Gracie was now becoming more involved in only her 2nd game starting on the wing before moving into the scrum.
With only one score in it the intensity of the game increased, the girls gave their all, exemplified by centre Evie Holme who never stopped driving forward with the ball and putting in some big tackles, Katie made some fine breaks, one of which may have led to a try had she not “scored “ on one of the Rugby League markings on the pitch!
Lili TP made a fine break in front of the large local crowd but her pop pass was taken by a home player and the chance lost and on the other wing Becca put a foot in touch as she dived for the line.
The Houghton scrum bolstered by their replacements who were as strong as the starting players was on top, Jessica did very well to hook the ball back, Lily and Matilda in the 2nd row gave their all and Katie at No8 and Charlotte scrambled the ball away well but under pressure. Houghton finished on top, a try was missed due to grounding before with the last play they secured the win with a try for a 32-22 win.
This was a fantastic game for the girls, tremendous amount of learning on how to play 15 a side rugby, getting used to the Laws and showing that they can compete.
Lots of areas are easily fixed and these improved throughout the match.
Training every Friday 4.30pm to 6pm at the club – all welcome – (Y7 to Y10)