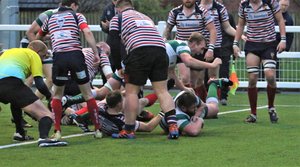 On paper this looked an even contest, both sides had seven wins to their names, Penrith had seven more league points courtesy of their ability to pick up bonus points but Birkenhead had two games in hand over them. And pretty even is how the game started, in fact the visitors had rather the better of things and deservedly took the lead with a penalty shot after eight minutes.
The home side slowly started to impose themselves on proceedings and had Mike Fearon to thank for a neat break which took play into the visitor's 22 and put them on the front foot. The forwards arrived in support, Andy Muir ran the ball up almost to the line and after several pick and goes it was Lee Chapman who finally forced his way over the line and Fearon added the conversion.
Penrith looked more dangerous now and would have liked to open the game up but Birkenhead were solid, well organised, hardly missed a tackle and were to wear down. Penrith got themselves into an attacking position when Jamie McNaughton launched a penalty to touch on the 22, JJ Key at the front of the line secured the ball and the driving maul was set up. The ball was shifted into midfield where Dan Richardson made a bit of progress before George Graham released the backs. The ball came to Fearon at outside half and as the cover streamed wide to cover the pace outside him, Fearon stepped back inside and shot in under the posts from the 22. He slotted the conversion and the Cumbrians had a healthy 17-3 advantage.
They weren't getting everything their own way though, they failed to secure the restart and were penalised as the ball ran loose and the visitors kicked for goal and reduced the arrears to 11 points. There was five minutes left to the break and the home side played their slickest piece of rugby of the afternoon to extend their lead once more, Josh Winder tidied messy ball up at the lineout and made ground before involving the backs, Arran Pamphilon and Fearon set McNaughton away who burst a tackle to break into the 22, Matty Boustead was in support and he was able to play the ball out of contact to Fraser Nicolson who dotted the ball down in the corner.
The conversion was struck well but went wide and Penrith led 22-6 at the break, the game hadn't quite been put to bed but the home side got the next score, the bonus point try, and then it was just about all over bar the shouting. The Cumbrians won good ball on half way, Graham, playing his first full game of the season found Fearon and followed the ball, the ball was played back to him and he set up Pamphilon who went for a gap he saw in midfield and he almost broke through. He ended up on his back and flicked the ball up to Boustead who shrugged off a would be tackler and left any cover that was there stone dead and went in under the posts.
The workman-like Wirral men never let up, they forced a series of four 5m set scrums on the Penrith line and eventually got their try, they then managed a further penalty late on to pull the score back within two scores with a view to look for a losing bonus point. It wasn't to be, as the home side's game management was good as they saw out the closing minutes and a McNaughton punt into touch ended the game.
Penrith were well pleased with their performance, it hadn't been the open scintillating rugby they sometimes serve up but that was more to do with the opposition who had made them work hard for everything they got. They had got their five points and you can't do much better than that..
Share via
FacebookTwitter
https://www.penrithrufc.org.uk
Recent news