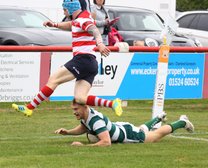 Penrith came away from Vale of Lune with their first away win since 2019, they hadn't won away in the second half of the 2019/20 season and lost again at Stockport a fortnight since so were delighted to get this particular monkey off their back.
They couldn't have got off to a better start, in the third minute they won a lineout on half way through Ben Higgins, Scott Lancaster crashed the ball up the middle, a couple of drives later, first Mike Fearon and then Jamie McNaughton rapidly spun the ball wide right where Matthew Boustead scored a try that just didn't look on. He stepped the Vale hooker and his winger and then outpaced the cover to score in the corner. Fearon could not convert the score but it was the only kick he missed on the day.
Vale struck back from the restart, on half way the home "10" chipped the rush Penrith defence, proceeded to catch his own kick and then move the ball into the visitor's 22. McNaughton was outnumbered at full back and was penalised for deliberately knocking the ball on, he got a yellow card for his troubles and the Lancaster club were awarded a penalty try.
Following a link up between Matt Allinson and Steven Cherry Penrith broke out of their own 22 and took play into the home half, the home side were penalised at the breakdown and Fearon kicked a long range penalty to give his side a one point advantage.
The home side in the middle of the first period were in the ascendancy and the Cumbrians had to defend well to keep them out , they faced a 5m scrum and then a lineout in the corner and withstood the pressure only to then be undone by a poor kick chase. The ball was cleared to half way and Vale have to be given credit for some nice link play but the visitors should have snuffed it out at source.
The home side led 14-8 as half time approached and it was the turn of the visitors to turn the screw, Vale were penalised and McNaughton's line kick was accurate and he pushed his forwards to within sniffing distance of the home line. Josh Dowson took the lineout throw at the back of the line, the Penrith eight set up the driving maul and made some headway but as progress came to a halt JJ Key rolled off the maul on the short side, although he was held, slipped the ball to Ed Swale who scampered in and ran round as far as he could in the vast home deadball area to make Fearon's task a little easier.
That looked like a satisfactory end to the first half but it was to get better for the visitors. Vale again incurred the wrath of the referee and McNaughton again was able to send his forwards to a lineout deep in the home 22. This time Key took the ball at the front of the line, again they went for the drive and again the home forwards stood firm. The ball was then moved wide to the right and Boustead almost squeezed in at the corner but was held up inches short, the ball then came back inside and Arran Pamphilon took a short pass, spun out of the tackle to dive over the line for the score.
That was the last play of the half and Penrith led 22-14, if the game wasn't over then it was within 10 minutes. Penrith started the second period on the front foot and had the home side penned in their own half, Dan Richardson, fresh off the bench, left the home defence flat footed with a little show and go on the 22 and scored with out a hand being laid on him. Shortly after Fearon held up the Vale ball carrier in his 22, Key striped him of the ball, spun out of contact, found himself in the clear and waltzed in from 20m unopposed. When Fearon kicked a second penalty that looked game over.
Penrith then suffered a rash of injuries, they had McNaughton and Allison off the pitch with head wounds and forwards in the backs and Vale staged a late surge and scored a couple of tries to make the score look more presentable and earn themselves a four try bonus point.
A bigger test awaits next week with unbeaten Kendal coming to Winters Park for a 4th v 2nd in the table clash
Share via
FacebookTwitter
https://www.penrithrufc.org.uk
Recent news