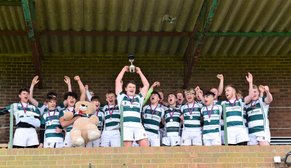 Four titles in one season!

This is perhaps one of the best Colts teams the club has seen in a very long time, our squad of young lads registered another fantastic win at the weekend. This time they added the U17 County Cup to go alongside the North East and Cumbria champion’s, U18 County Cups and league winners to round off an incredible season.

The Penrith lads knew they had to raise their game one last time if they were to emulate the success of two weeks ago in the North East. That they did and against a very good Keswick side at the Wigton ground. A large crowd were entertained with an enthralling contest that was much tighter than the score would suggest. Keswick had their fair share of sustained pressure inside Penrith’s 22m that tested our defence, but we managed to keep a clean sheet, with the exception of a driving maul from a lineout in the last five minutes! Penrith made the most of their opportunities when they arose by converting pressure into points with three converted tries and two penalties to Keswick’s one try. Our young Colts ground out another well-deserved victory, 27 – 5.

Keswick kicked off and started with some early pressure but our defence was equal to it. As Penrith started to settle they strung together some good rucks and moved the ball out wide. From a Keswick throw-in on halfway, we managed to rip the ball out from the maul then spin it out wide right. The defence was on their heels as we strung together several quick rucks that was rewarded with a penalty for offside. The advantage and play continued briefly but was brought back for stand-off Louie Johnson to add our first three points. Penrith’s next score came from a combination of good team play and an individual piece of brilliance.

Having rucked their way deep into Keswick’s half Louie’s failed drop goal attempt was in stark contrast to Keswick’s well elevated and deep 22m dropout. Fullback Fraser Nicolson caught the ball on the full inside our half then jinked his way into the middle of the advancing pack. With the doors rapidly closing he chipped, chased, collected, then stepped the fullback to go under the posts, Louie converted to make it 10 – 0. That’s how the score remained until halftime.

Penrith started the second half on the front foot, in the opening minutes we counter rucked well to win another penalty just inside Keswick’s half. This time Ed Smith’s long-range kick drifted just right of the upright but underlined Penrith’s resolve to keep the scoreboard moving. Keswick was still very much in the game, their talented centres frequently breached the gain-line and made timely offloads. Our back row was working hard to plug the gaps and snuff out any potential progress making solid tackles. The pack were being a nuisance in the rucks as they generated a good share of turnover ball by either holding up the attackers or by ripping out the ball to turnover possession.
Keswick had a very good phase of play inside our 22m with a succession of scrums and penalties. They turned down the easy option of a kick for three points, instead, they were looking for five or seven. A blindside move from a 5m scrum on the right should have rewarded their industry but the final pass to the wing went astray into touch. The resulting Penrith 5m throw-in produced another piece of individual magic. With the ball secured a driving maul drew in their pack, scrum-half, Hugh Burne spotted a gap and then exploited it down the tight blindside. A dummy pass and a sidestep along with an injection of pace left the defenders trailing in his wake. Another sidestep around the fullback opened up the way to the line. Louie Johnson was hot on his heels as a defender closed in, the offload in the tackle was sublime. Louie stepped up a gear for the short sprint to the posts, Ed Smith converted.

Ten minutes on we were again on the ascendancy. This time a panicked clearing kick from outside the 22m brought play back for a lineout. The precise throw was, in turn, fed quickly to Louie at fly-half, he spotted a gap then powered through it with Ed Smith and Fraser Nicolson close is support. An offload in the tackle found Ed, who in turn found Fraser with his quick sleight of hand pass to keep the momentum going as he crossed the line for a second time. Fraser also converted for the extras.

Full time was looming but Keswick dug deep. With a couple of quick penalties conceded from the restart, Penrith was once again defending a 5m throw-in. This time the catch and drive kept moving forward as some of our pack hung off expecting a runner from the back of the maul that never came. It was well worked and nothing more than they deserved, final score Penrith 27 – 5 Keswick.

A great win to cap off such a remarkable season with so many wonderful highlights. Lasting memories for all the lads and family members to take away.

A special thanks to the coaches, Tim Shepherd and Gary Johnson along with the other volunteers who have devoted their time to help make those special moments happen.