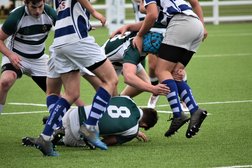 Penrith welcomed Tynedale to Winters Park in the first round of this seasons National Cup that turned out to be a tough battle between two strong Colts sides. It was enthralling to watch and provided some good entertainment for the spectators, Penrith ran in a solid performance with moments of both individual and team brilliance. The visitors were always going to be very hard to break down, their pack was powerful upfront and the backline handy when they were allowed time with the ball in hand. Our defensive capabilities was tested frequently with Tynedale making the most of our handling errors along with a penalty count that was far too high throughout. Although Penrith were on the scoreboard in under two minutes with an unconverted try, thoughts of an easy game were quickly put to bed as the visitors bounced straight back with a converted try of their own to take the lead. We created more opportunities and took our chances when they appeared, it was a victory built on good defence, full-time score 34 – 12.

From the kick-off, Tynedale knocked the ball on to turn over possession. From the resulting scrum on the 22m, the ball was first moved wide right, then recycled left at the breakdown. Olly Bibby at fullback stepped up to provide the extra man in the backline for a short uncontested run in for the first score. The visitors then took full advantage of a clutch of penalties conceded in quick succession. A tap and go on our 10m line caught us on our heels as Tynedale picked and drove on from the rucks. The huge number 4 had the final say as he crashed over to the right of the posts for a converted try to take his team into the lead.

Fly-half Fraser Nicolson was next on the scoresheet, from a Penrith lineout on the left. Three phases of play by the pack took us centrally up onto the 22m, Fraser took the ball at first receiver passed to inside centre, Ed Smith who then broke through the first tackler. He passed back to Fraser on a loop and into space as the second tackler was drawn out of position that opened the way to the line. Olly Bibby got his second try with ten minutes of the half remaining, a deep clearing kick off the base of a scrum 5m by the visitors found Olly on the 10m line. A clean catch, a clean pair of heels and a wonderful side-step through the advancing Tynedale players took him all the way to the try line, half time score 15 – 7.

With the wind behind us, Penrith started to make good use of the kicking game. A perfectly weighted Fraser kick bounced tantalisingly close to the try line. A good chase took him over for a Penrith scrum 5m. Fraser again looped round to set up Olly for his third try, his pass found him in acres of space. Our next try came from a lineout on the right midway into the visitors half. Good support play and quick ball from the rucks gave us five phases of play that breached the gain-line every time. Josh Winder finished off by charging through two tacklers and over for a well worked try by the pack.

Five minutes later left-wing Sam Potter got over into the corner to round off a great team try. The forward's industry was rewarded with a scrum on Tynedale’s 10m, Lewis Stewart at lock marauded his way up onto the 22m breaking tackles and drawing in the defence. From the ruck, the ball was spun out left down the backline with slick hands for Sam to exploit the overlap. Tynedale however, had the last say in the dying minutes as we once again gave away a silly penalty. The attacking lineout, catch and drive managed to breach our line for a second time. Full-time score 34 – 12.

Well done and a well-deserved win but by no means the polished article. Poor discipline resulted in far too many penalties and yellow cards that can and will prove more costly as we progress and meet better sides in the National Cup. Thanks again to Adrian as cameraman and to Tracey for completing the match card.

Round 2 is away at Carlisle on Saturday the 16th of November.