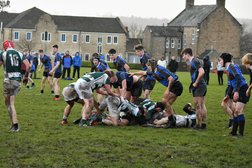 High winds and driving rain was the order of the day for our first meeting with Barnard Castle School. The conditions undoubtedly influenced the kicking game and line-outs, but it was something that both sides had to come to terms with.

This was a development game of three twenty-minute periods. Both teams had suffered from absent key players due to County commitments the next day. Credit goes out to Gary who rallied the troops to pull a team together that included several U16 lads who’d stepped up to fill the gaps as their game had been cancelled.

It’s a long time since I’ve experienced such high winds with the rain peppering your face that was almost painful. Anyhow, we managed a squad of 17 players to travel over Stainmore, which was almost as exciting as the game! Our young Colts were up against what we expected to be a well-organised outfit, and that they were. The first 20 minutes was played with the wind to our backs and after seven minutes scrum-half Aaron Cavaghan crashed over to the right of the posts from the back of a scrum, fly-half, Matty Irving added the extras. What was clear from the off is that the home side could pass, catch and carry well in such appalling conditions. They had some good ball carriers off the fringes of the rucks that made good ground, and in the face of the wind their tactic of a quick tap and go when we conceded penalties also gained yardage.

Three minutes after our first score Barny added seven points of their own, rounded off by several good phases of play and pressure with a big ball carrier crashing over off the fringe of a ruck on our try-line.

The second twenty minutes saw our lads starting to grow into the game along with a better structure, the lads were working hard especially in defense. We started to dominate the scrums frequently wining the ball against the head. The game was evenly matched and as expected Barny used the wind to pin us in our 22m. We managed to break out and capitalised on some rare handling mistakes brought about by good back-line pressure and the unpredictable weather conditions. Our next try came from a good passage of play, the pack kept the ball tight down the middle and managed to move up onto Barny’s 5m. The home-side had the put in, but another dominant scrum moved them back, the ball popped out the side and Aaron was quickest to react and over he went. Matty’s conversion attempt in the strong wind struck the left upright, 7 – 12.

The last score came from a penalty kick by Matty five minutes into the last period with the wind at his back. A hard-fought game in poor conditions against a purely U17 side that was depleted of several key players. Our lads were impressive by the way they all gelled, they played seamlessly and never looked like a scratch side.

Thanks to all the lads for stepping up to make this fixture happen and thanks to Barnard Castle School for their warm hospitality. Hopefully a fixture in our calendar for next year.