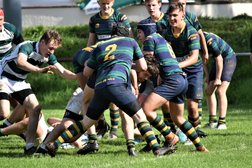 Our first run-out of the season with a new squad was away to Keswick. With the end of the school holidays looming we managed to field 21 players. In contrast, Keswick had a bare 15 that went down to 13 with injuries as the game progressed. We had our injury issues to contend with but we were still able to supplement the home-side to keep the match competitive.

Our pre-season wasn’t the best this year and at times it reflected in our play. Having said that there were some promising spells of pressure that we managed to convert into points. The match was classed as a training game and had four 18 minute quarters that gave the coaches and lads a great opportunity to get their rugby heads on. On the balance of play the 12 – 34 score-line was about right with both sides missing some influential players.

Although we ran in 5 tries to 2, Keswick produced the try of the game with a fantastic cross-field kick from an attacking lineout on their right. With a clean ball won it was punted and gathered in on the full by the left-wing who then had the simple touchdown. The home side put together some good phases of play that tested our defence with some success, but in attack we created more space and more opportunities, some went begging and some were well taken. The lads getting on the scoresheet were, Hugh Burne, Nathan Allcock, Joe Robinson, Aiden Cavaghan and Tom Hill.

Our first competitive league game is at home with a 1pm kick-off on Sunday 15th of September against Novocastrians.