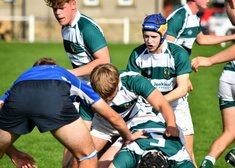 Another scoreline to be proud of as the Colts continued in a rich vein of form with a fourth straight win from four. Just one of those played at Winters Park with the rest away from home. So far 201 points have been scored for, and just 12 against. Our hosts were by no means an easy pushover as the scoreline would suggest, they had a large and powerful pack and a handy backline. The dry sunny day turned out to be a successful one, the travelling spectators and parents were thoroughly entertained with a seven-try victory.

We still await the outcome of Carlisle vs Tynedale to find out our next opponents, they play this coming Sunday.

North Ribblesdale gathered from the kick-off and ran their big back rows hard at our defensive line, they in turn were met with head-on crunching tackles as we held firm. We hampered and challenged well in the rucks and forced the home team onto the back foot several times. Our first score came from a defensive clearing kick straight into the trusty hands of Rob Coward at full-back. Clever footwork took him into open space, with an imminent tackle by his opposite number a timely offload to Jack Tunnicliffe in support cleared his way to the line with just 5 minutes on the clock. Our dominance in open play forced turnovers in the rucks and led the way for our second. Aaron Cavaghan ran the ball from the base of a ruck from outside the 22m, he still had lots of work to do and defenders to beat. Clever footwork, hand off’s, pace and sheer determination took him over to the left of the posts. Lewis Newton slotted the extras.

The battle up front heated up but the lads kept their composure to continue our success at turning over the ball, led by lock Archie Rattray. He then got himself onto the score sheet as he ran back another defensive clearing kick picked up inside our half. With good support to his right he used great footwork, strength in the tackle and boundless energy that eventually took him over the line, Lewis again converted. To add further pain to the visitors we ran the ball back straight from the kick-off, the forwards fed the backline. Jack Tunnicliffe first drew the defence then made a timely offload to put Lewis into space. Replacement fly-half Dan Woodcock added the extra points. Up to this point the majority of the game was played in the visitors half. They reminded us of their quality for the next 10 minutes or so as they pressed and moved up onto our 22m. We conceded penalties in quick succession and our defensive capabilities were put under the cosh but we managed to weather the storm into the halftime break, 0 – 26

The second half continued as the first had finished with some hard-fought contests up front, but with more avoidable penalties we conceded ground to allow the visitors to build some momentum deep into our half. However, we weathered the storm and protected our try line stoically to get back to scoring ways 15 minutes into the half. The next score came from one of our fearless workhorse’s, flanker Felix Green. With another solid scrum centrally on the visitors 22m, the ball was fed out to Lewis who offloaded back inside to the flanker running a straight line, he crashed over between the post with both ball and defender in tow, Dan again converting. Arguably the best try came next. Great open play and carries into contact with good support gave Ollie Swain at number 9 an opportunity to dash for the line. He was held up just short, but a steam train travelling at pace off his right shoulder, otherwise know as second-row Dylan Thompson. He gratefully accepted Ollies pop pass and crashed over for his first try, ever, so I’m told! With full time looming and our by now constant pressure, the home side's frustrations crept into the game. The referee nipped things in the bud, but the home side was caught on their heels as a quick tap and go from a 5m penalty found Jack Tunniclffe at pace with momentum to crash over between the posts, Lewis converted for a final score of 0 – 45.

A well-deserved victory against a very credible home side who to be honest was never allowed to show their true quality.