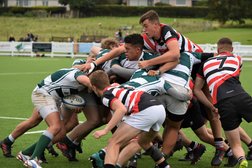 The first league game of the season saw the lads run out comfortable winners against a Novos side of just 14 players, they were missing some key players including a front-row prop. Uncontested scrums were the order of the day. In contrast, we had 22 lads, some of whom played for Novos. The first half was more competitive up front but we were more creative out wide. The visitors did test our defence from penalties we conceded that gave away possession far too cheaply. Joe Robinson at centre and Tom Hill at flanker took the early tries and fly-half Ed Smith converted.

We had spells on the back foot that tested our defensive capabilities from quickly taken penalties, and attacking 5m lineouts. They scored from one such lineout that closed the gap to just seven points. With 10 minutes of the half remaining we put together some good passages of play, our handling was assured and support play was good, offloads in the tackle managed to keep the momentum going forward. Left-wing Harry Chambers went over from a blindside move off the base of a scrum, as did Joe Robinson for his second try, switching to the blindside down the right from a 10m scrum. Half time, 24 – 7.

We started the second half well and should have scored within the first minute. A break into open space and with the fullback committed to the tackle the offload was knocked on. Hooker, Ben Riley was next on the scoresheet from a Penrith 5m lineout. With the ball taken in cleanly the drive moved to within sight of the line, Ben crashed over to cap a well-worked try. Tom Kirk was next to score, it started from a searching kick into the visitors 22m. The chase was good and with the visitors under pressure the ball was turned over for Tom to scurry through a gap. Within five minutes we were again on Novos 5m line, a quick tap from a penalty found flanker, Lewis Stewart at pace, he ran round the last man for a converted try.

We kept the visitors under pressure, the scoreboard kept ticking over, their heads went down and tackles were missed. Fullback, Hugh Burne was next. A panicked clearing kick from inside Novos 22m was sliced down the middle of the pitch, Hugh tidied up and then ran it straight. Side-stepping one, two then three defenders to show them a clean set of heels. Lewis was still causing havoc with another break down the middle, a tackle by the fullback left the supporting player Bryn Jeremiah a straight run in.

A great team try came next, right-wing Ryan Edmondson made the initial break but was unceremoniously pushed into touch. From the lineout we turned over possession, quick hands down the backline put the left-wing, Sam Potter into space to round off some simple but effective rugby. From a messy re-start and with no-one claiming the ball as it bounced loose, flanker Archie Rattray tidied up. Breaking the tackle a gap opened up for a sprint all the way to the line. Tom Hill’s second try was the last of the game. The visitors fumbled possession on the halfway, Tom was quickest to react scooping up the ball then driving all the way to the line. Fulltime score, 70 – 7.

A big thanks to James McLeod, Ben Megannon and Harry Chambers for pulling on a Novos jersey.

A good start to the season but not one against a full strength side. There was a good crowd down to watch and the ref, Pricey did alright too. This Saturday is another home game with a kick-off at 11:30 against Egremont before the first team’s home game kick-off at 3pm.