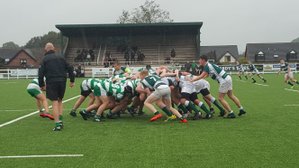 We are well into the season now and this is just our second league game due to cancelled away fixtures courtesy of the bad weather. We managed to pick up another home win against a very strong well drilled Billingham side that frequently put our defence under the cosh. We were equal to the test, especially down the middle as our pack put in a solid shift to secure possession from the rucks. Our backline was quick to close down the visitors, with little time or space, they made handling errors that turned the ball over. Their only unconverted try went out wide into the corner to reward some sustained pressure. We were frequently pushed back in the scrums but managed to retain possession. Our lineouts functioned better than the visitors and we managed to exploit the gaps that were ultimately converted into tries for a hard-fought but deserved victory, 26 – 5.

From our kick-off, the chase was rewarded with retained possession where we managed to string together some good phases through the pack. With the ball turned over the visitors pressed on into our half stringing several phases that were rewarded with early penalties. Two early opportunities went begging with stray passes not finding the right-wing who had open space and the line in front of him. Hard work, patience, pressure and better handling were later rewarded. The first try came from a visitors clearing kick off the back of a 5m scrum, it was caught then fed to the fullback, Olly Bibby, he in turn linked up with the backline moving left back up onto the 22m. From the breakdown we had a quick ball, Fly-half, Fraser Nicolson then carried and shimmied his way down the short left side. With spare men and an overlap, the defence drifted leaving the space for Fraser to exploit for the first score.

From the restart, Billingham quickly worked their way onto our 5m line as we conceded silly penalties. From a 5m attacking lineout, they sensed an imminent score as the big lads tried several times to smash over the try line from the quickly recycled ball in the rucks. Our defence stood up to the test, we were rewarded with a penalty for not releasing. From there we worked our way back into the visitors half. The game remained tight but the 20-minute deadlock was broken with another Penrith try shortly before half time. Our backline was quick to close the ball when they moved it wide. With little time to operate it created a fumble and a rushed clearing kick. The ball was retained from our shortened lineout on the 22m, a crash ball took us to within 10m. From the base of a ruck just in front of the posts, scrum-half, Tom Kirk dummied then darted through a gaping hole on the edge of the ruck, Fraser converted for a half time score, 12 – 0.

Penrith picked up where they'd left off from the restart. With less than 10 minutes into the half, we had a scrum centrally on half-way. The ball was fed down the right with Olly Bibby joining the backline. Another gap opened up as he injected good pace and good footwork he cut a diagonal line cleverly going round the fullback and then under the posts. Fraser converted to lift the score to 19 – 0. With 12 minutes remaining our defence was breached while defending our try line. A second penalty conceded in quick succession was taken quickly then spun out wide right with a long pass finding the right-wing who dived over into the corner. Disappointing from our point of view but nothing more than they deserved. We did, however, have the last say three minutes later with a Tom Hill try. From the re-start, the visitors tried to move the ball but were again closed down quickly. They were backtracking and soon on their 22m, a clearing kick was tidied up by Olly who carried into contact 15m inside the Billingham half. One more phase of play saw another gap open up this time in the middle of the ruck. Tom with his head up needed no invitation, he scooped up the ball off the base of the ruck then darted through the gap. Having half-rounded the fullback with the line in sight he piggybacked him the short yards over the line showing good pace and strength in the tackle. Ed converted to give a final score of 26 – 5.

Well done, and a good win built on a committed defence and a great team spirit that included some new lads who never looked out of place. A big thanks go to the referee, Beef who stepped up to ensure the game went ahead at the last minute, also to the new videographer, Adrian Hill.

A big game this Sunday in round one of the National Cup at home against Tynedale with a 2pm kick-off. Spread the word and let’s get some support down to make a noise for us.