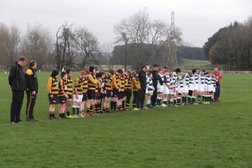 Penrith v Wensleydale 09/11/14
A good warm up at the Frenchfield ground got the boys into the right mood after a decent lay off and the holiday period. Everyone was keen to get stuck in. The weather was dry and mild, ideal rugby conditions!
The Remembrance Sunday game was preceded by a minutes silence as a mark of respect.
Wensleydale kicked off and immediately won a scrummage on Penrith’s 22m line following a knock on. The pack was up for it, Hayton Dixon (2) winning the ball against the head. Penrith pushed forward up the pitch with some good rucking and mauling. The ball was recycled well, sucking in the defence, Wensleydale fumbled the ball in a ruck knocking it on. Penrith’s scrummage secured the ball against a hard driving Wensleydale pack. Sure hands from Hugh Burne (9) fired the ball out, Joe Robinson (13) received the ball and saw a gap down the right, he was off, that was the first try after just 4 minutes. Louie Johnson (10) slotted the conversion to make it 7 – 0. Wensleydale came back with a short period of pressure, determined to level the score. They rucked well but the Penrith defence was up quick and cashed in on simple errors. On seven minutes Penrith spoilt a throw in and took the drive forward, the game moved into Wensleydale’s half and again the ball fed to the backs. The backs handling was sure, but the defence tackling equal to it at this stage of the game. The backs foraged down the right, and another break down in play looked like the ball would be turned over. Louie was in support snapping up the ball. With two defenders and 30 meters to go, a delicate grubber kick and pick up saw a good individual effort for the second try on 10 minutes, 12 – 0.
From the re-start Ross Ridley (4) got his hands on the ball and again showed his wing credentials… He was off, from the left side to the right evading tackles and handing off making a good 30 meters. The momentum continued with the forwards down the right. Simple hands moving the ball out down the back line again found Joe Robinson in good form, grounding the ball over the line on 14 minutes, 17 – 0. Wensleydale’s heads were down by now but they managed to keep Penrith at bay for the next 8 minutes, their strength was in the scrum, they were solid and rarely moved backwards. Penrith however played to their strengths in loose play with good hands and pace in the backs. On 22 minutes Penrith were again on the ascendancy down the middle. Hugh spun the ball out and Ed Smith (12) was quick to support Louie in a breakdown. A dummy pass and a couple of side steps later, Ed’s outstretched right arm put the ball over the line, 22 – 0. Louie converting for the additional 2 points just before the whistle blew for half time, 24 – 0.
Penrith started the second half where they finished the first. Four minutes in, Ross Ridley (4) drove over the line in the corner to the left of the posts, 29 – 0. Joe Robinson obliged with a simple conversion, 31 – 0. Play continued, at times a little disjointed with no real pressure from Wensleydale’s back line. It was another six minutes before Penrith threatened the opposition’s line. The forwards drove down the left near to the 22 metre line. Hugh grasped the moment making a break down the blindside. It looked like he would score but, a last ditched tackle put him into touch. Bryn Jeremiah (1) scooped up the loose ball at the front of the lineout with both hands then drove the 5 metres over the line to score, 36 – 0. From the re-start Ross got the ball at pace inside the half way line, a couple of missed tackles, and a hand off took him down the middle and between the posts, 41 – 0. Ed converted, 43 – 0. With six minutes remaining a ruck formed midway into Wensleydales half, Hugh fired the ball out, Brodie Glendinning (7) always on the lookout for an opportunity got up a head of steam. He cut in from the right breaking a tackle before finishing between the posts, 48 – 0. Ed again adding the extra points, 50 – 0.
In the last minute of the match Wensleydale’s pack won a scrum 10 metres out from the Penrith line. They retained possession in the subsequent ruck with good hands. Support was close by and they went over to the left of the posts for a well deserved try, 50 – 5.
A big thanks goes out to the referee Adam Howe who had an excellent game, and to the support from all the family and friends. Well done lads.
Share via
FacebookTwitter
https://www.penrithrufc.org.uk
Recent news