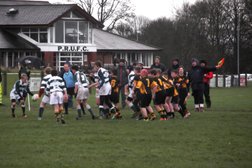 After the hard frosts and snow flurries of the previous few days, the pitch passed a morning inspection. The weather had warmed up sufficiently, but the wind and rain was to play an important role in a closely fought game.

Egremont kicked off with their backs to the wind, this was to be a key factor for both teams. After just two minutes Egremont recycled the ball from loose play in the maul on the half way line. The stand- off had both presence and a good boot. He sent the ball cross pitch deep into space behind the Penrith defensive line. They also had the pace on the left side to support, the chase was picked up and touched down successfully, 0 – 5. Over the next ten minutes Penrith managed to recycle the ball in the scrummage but were less cohesive in the ruck and maul. Egremont were again pushing hard on the Penrith 22 metre line, twelve minutes in Louie Johnson (10) had something to say about that… Weaving around the pack and onto the right wing the afterburners were engaged! The Egremont left wing, stand off and covering full back were in close pursuit, shouts of “Kick It” were ignored as he dug deep for the extra gear that ultimately carried him over the line and between the posts, 5 – 5. Ed Smith (12) obliged with the additional two points, 7 – 5. That Egremont fly half was again influential as they pressured down the right side. He broke a tackle and seemed to have an easy touch down, however, the jog towards the posts was interrupted by Ed Smith’s tackle that caused him to fumble and drop the ball. Within minutes another drive, chip and chase saw Egremont over the line and what should have been a try, another fumble and scrum five. The game ebbed and flowed over the next ten minutes, Penrith dominating the scrummage but disjointed in the ruck and maul. After 20 minutes Penrith were defending a penalty in their half. Egremont recycled the ruck and spun the ball wide, try in the right corner, 7 – 10. On 23 minutes Penrith were looking to retain possession and push forwards from a scrum in their own half. Egremont were up quickly and a loose pass intercepted by, yes that number 10… 7 – 15.
Penrith dug deep from the restart and recycled the ball well from a scrum. The following ruck was straight off of the training ground, shouts of “One, two, one, two” along with good body angles took them forwards towards the posts. Bryn Jeremiah (3) scooping the ball up and driving to the right of the posts was tackled with just inches to go. The pack was in support and the frantic defence by now sucked in. The ball was spun out wide to Joe Robinson (13) who spun into action, he carried the ball over to the left of the posts, 12 – 15, Half time.

From the re-start Egremont kept up the momentum. On 3 minutes a scrum on Penrith’s 5 metre line gave the attacking number 9 a pick up and drive over into the corner, 12 – 20. Ten minutes in Penrith were pushing hard midway into Egremonts half. That number ten got his hands on the ball and punted it against the wind well into Penrith’s half. With the bounce, Tom Kirk (15) picked up on his 22 metre line but found himself isolated, tackled, and ball turned over. Another Egremont try, between the posts, 12 – 27. Penrith’s heads were down and the second half advantage of the tailwind was yet to be realised, and used to good effect. ”Inspirational words of advice!” between the posts from Gary and Craig seemed to do the trick. On 21 minutes a pressing lineout in the opponent’s half saw the ball recycled (without the refs whistle penalising Penrith, ball held up!!!) Joe Robinson got his hands on the ball and jinked his way around three defenders to touch down, 17 – 27. Ed Smith obliged with the extras, 19 – 27. There was now a sense of urgency and belief from Penrith. Louie took the push forwards with another fine individual effort down the left wing, a cheeky grubber tempting the defenders, knock on, advantage Penrith. The driving pack rucked the ball down the middle onto the ten metre line. A pick up and drive from Sam Campbell (7) securing the points, 24 – 27. Ed Smith’s trusty boot was aided by the left upright to make it 26 – 27. Full time.

A tense game, at times frustrating, but overall very entertaining. Well done to all the lads, a great effort.
We hope everyone has a fantastic festive period, all the very best for 2015 from the coaching and admin staff.