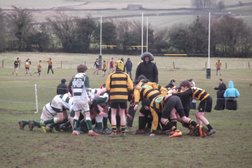 The 08:25am day got off to a bright start with the sight of an NBM luxury 52 seater coach! The hour and a half journey each way in relative comfort (a pleasant change to the smaller and noisy bus!)

We arrived in good time to get sorted round and have a decent warm up, 17 players at the ready. No selection dilemmas for Gary this time as Wensleydale were short two players. Ross Ridley and Tom Kirk kindly offered to do the first half honours. The wind swept pitch was pushing the temperature from just above freezing to just below. With the cutting wind it looked like the forwards would be keeping warmer than the poor old wingers.

Wensleydale kicked off from left to right, driving forward and creating the error, 2 minutes in a Penrith knock on gave them the put in 10 metres from the Penrith line. They won the scrum and following ruck, breaking free, the attacker grounded the ball feet from the left upright, 5 – 0. The conversion a simple chip for the extra two points, 7 – 0. Wensleydale were however to return the favour from the Penrith re-start. A fumble forward giving Penrith the put in near to the half way line, the ball was popped out to Brodie Glendinning (No 15) who was determined to make some yardage. First going left, then right, drifting out on a diagonal run towards the right wing. He was slowed by a couple of broken tackles and managed to pass to Callum Harkes (No 14) Callum weaved his magic, made the gap and used his pace to leave the defenders behind, 7 -5. Louie Johnson (No 12) obliged with the kick, 7 – 7.

The game was evenly balanced, but shouldn’t have been. Penrith were playing way below par, poor rucking, body positions and tackling (with the exception of Brodie) Forwards were reluctant to get involved and everyone seemed out of sorts, not just out of position! In brief the cold weather had numbed more than their hands…

Twelve minutes in Wensleydale capitalised on the disjointed rucking. Winning the ball near to the half way line, a good individual try into the left corner by the stand-off, another by-product of missed tackles and ineffective rucking, 12 – 7. That score was to stand until half time. A good talking to by Gary and a reshuffle to more familiar positions was to inspire a better second half. The Penrith restart was immediately put under pressure and they were driven back into their own half. Some scrappy play down the right side resulting in a Penrith scrum near to the 10 metre line. With the ball won, play came down the blindside, Tom Kirk (No 14) offloaded to Sam Campbell (No 8) who was quick in support. Sam drew the defenders then unselfishly offloaded to the inside support, Joe Robinson (No 10) with some elusive side steps, the way opened up nicely, he was off down the right at pace. A slick piece of team play that reminded us of what they can do, 12 – 12. Brodie’s kick was made easier, straight between the posts, 12 – 14. The game ebbed and flowed with the majority of the game played in Wensleydale’s half. However, marred by basic errors, numerous dropped balls and upright rucks and mauls. The backs at times getting it together and looking good when they did, the forwards were becoming predicable and inconsistent.
On 21 minutes Wensleydale made a foray down Penrith’s right, midway into their half. More scrappy play resulting in another lineout. This was one area we had good success. The opposition’s throw in was again intercepted by Ross Ridley (No 5) With the ball in two hands, his size bounced the defence off, the gap appeared and that was enough. With a turn of speed unusual for someone his size, he was off like a shot. He tucked the right wing long enough to lose the last defender then swung left and under the posts, 12 – 19. Tom Kirk converting, 12 – 21.

Well done, a good win, however, like my old school reports, “Could do better!” and they will have to with tougher opposition looming.