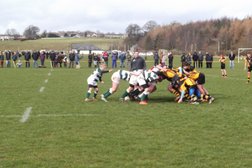 The biggest day of the year so far was eagerly anticipated and greeted with a dry but blustery day at Frenchfield. Hopes were up and optimism high, the last encounter in December ended in a Penrith defeat at Winters Park by one point. Family and friends turned out in good numbers and were in for an entertaining game.

Egremont kicked off into a deceiving slight headwind that appeared to be cross pitch! A key part of the game that later proved costly for Penrith. The early clashes resulted in an Egremont scrum near to half way. They won the ball and moved forwards onto Penrith’s 22 metre line, an inability to clear the 22 resulted in another knock on to give the visitors a scrum with yards to go. Penrith got the edge with the push, but Egremont quickly fed the ball back and out to the No 12 who took the ball the short distance over for the first points of the game after just 3 minutes, 0 – 5. Penrith consolidated pushing onwards into the oppositions half, the forwards were rucking well with Hugh (No 9) cleaning up behind with good ball out to Louie Johnson (No 10) Egremont’s defensive line was well drilled but at times too eager, pressing up early. On 7 minutes a penalty was awarded to Penrith for offside just short of the 22 metre line and fairly central. Ed Smith (No 12) stepped up to the plate and did the honours, 3 – 5. The boot of the opposition No 12 was to prove pivotal throughout, pushing back Penrith’s hard earned yards. On 12 minutes it took them back into Penrith’s half, a reluctance to drop on the ball resulted in the ball being fumbled forwards. Egremont capitalised with the ball being carried over into the left corner, 3 – 10. Penrith continued to have good success going forwards, especially in the scrum and lineouts winning the ball against the head. Hugh and the backs were under close scrutiny from the defensive line pushing up quickly, the ball was getting spun out but the receiving players were immediately under pressure to pass or take it into contact. On 20 minutes Penrith sustained some pressure inside the Egremont 22m, the ball recycled from the ruck with the ball moving first right and then left. The defence held up with good solid tackling, Penrith eventually fumbling on the Egremont’s 22 metre line. A surging drive from the Penrith pack in the following scrum took the ball against the head, it was fed out quickly, Joe Robinson (No 13) the ever keen recipient, injected pace towards the right corner and the score seemed imminent. However, a last ditched defensive (high) tackle bundled him into touch against the corner flag. The referee was on hand and penalty try awarded, 8 – 10. Ed adding the extra points, 10 – 10. The restart was returned with interest, Louie scooping up the ball and offloading into contact near to the half way. Tom Sharkey (No 6) kept the momentum going down the left wing well into the oppositions half, the covering No13 tackle taking him into touch. The half ending level on 10 – 10.

Penrith kicked off the second half and were successful in pushing forward. Egremont shifted the ball under pressure onto their right wing, a cheeky chip kick took them over the half way. It wasn’t dealt with by Penrith and the winger snapped up the bouncing ball. A messy ruck formed, with the Egremont stand-off eager to get involved looking for the ball. It was popped up and he took it at pace on the angled run from left to right, cutting through the Penrith pack all the way into the right corner, 10 – 15. The No 12’s big left boot adding the extra’s. 10 – 17. On 8 minutes Penrith again took the initiative pushing forward well into Egremonts half, that nuisance of a left boot again took the steam out of the attack, sending the ball back onto Penrith’s 22 metre line. Tom Kirk (No 15) trying his best was caught by the very quick follow up No 13. A resulting penalty secured the attackers ball and subsequent try and conversion 10 – 24. Penrith’s resolve and good handling took the fight back into the oppositions half but the wind and mature boot of the number 12 was working against us. On 14 minutes Tom was again under pressure, the resulting ruck got messy and Egremont snapped up the loose ball on the 22 metre line. A well executed drop goal gave Egremont another 3 points, 10 – 27. Some of the Penrith players were feeling the pace of the game, the dominant push in the scrum had subsided and heads were dropping. The dogged determination, and good tactical kicking of the home team lifted spirits, first with Tom Sharkey’s debut try following a lineout against the head and good rucking, and then Louie Johnson’s try into the left corner, his good support play, and pace taking him over the line. Penrith once again “believing” but rapidly running out of time. Result, 20 – 27.

Penrith were the better technical team but didn’t effectively breach the gain line due to the solid line defence and good tackling. Egremont played an intelligent game using the second half wind to good effect with the boot, they were worthy winners. A great game, enjoyed by all who watched it, some good individuals shone through but as always it has to be an overall team effort. Well done boys, better luck next time...

Thanks for all the support from the families, friends, volunteers, coaching and admin staff who put themselves out to make it happen week on week. A big thanks also goes to the referee who did a sterling job.